Why Paris is called Paris ?

France abounds with marvels. The BVJ PARIS youth hostels, a simple and unpretentious youth hostelling non-profit organization, in the most central and Parisian areas of the French capital, founded by a team of teachers, educators and travellers in 1948 for a different approach on people, things and travelling. So, tripsters in Paris for 1 night in Paris or more : where does the name Paris comes from?

Paris, where does your name come from?

Its name has inspired the greatest men. Victor Hugo exalted it with his feather in Notre-Dame de Paris, Baudelaire casted a shadow over it in his Spleen and Huysmans immortalized it in his Croquis. And what to say of the seventh art, with so many films dedicated to this splendid city, or Edith Piaf who sang under its sky or Maurice Chevalier who personified this “blonde” in his “Queen of the world”?

Paris, Paris… it’s name only is enough to justify the prestige it incarnates. World’s fashion capital, city of love, city of lights… the periphrasis are innumerable. Where does this name come from? Why is Paris called Paris?

«My Kingdom for a Dustman»

It wont be a surprise to anyone that the capital wasn’t always called Paris. The readers of the Asterix comics know it for sure. Originally, the more than 2 million people megalopolis was called Lutèce. A plausible denomination due to the dusty lands over which was established on the 3rd Century before our era the first Celtic fishermen village: the Parisii. 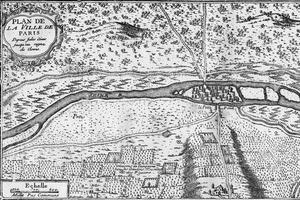 The Peti Robert indicates that the capital changed its name around 52. It’s the period of Jules Cesar first campaigns. The emperor wins an important battle at Alésia and imposes Rome’s power over all Gaul. The people of the Parisii who where trying to resist where obliged to accept its defeat, starting by changing the city name.

Nevertheless, there wasn’t a big disruption. The Romans decided to simply change the village’s name after the Parisii’s name. Thus, Lutèce was newly baptized as Civitas Parisiorum or “Parisii’s village”

It wasn’t before de 5th Century DC, after the rise of the Gaul city under the kingdom of Clovis that Paris became the capital of the Francs kingdom and still today the neuralgic center of France.