Open daily from 9am to midnight, the Paris-Plages are open annually and are free to enjoy, with artificial beaches installed along the banks of the Seine and the Bassin de la Villette for one month every summer.

A 3.5 km strip between the Pont Neuf and Pont de Sully bridges forms the main beach activity area along the Seine, while additional areas have also been installed at the Elisabeth and Louis Lumière sports centres of the 14th and 20th arrondissements respectively.

Visitors can enjoy beach volleyball, rugby and basketball on the square in front of Hôtel de Ville, where City Hall is housed, or sunbathe on a beach complete with sand, deck chairs and palm trees on the Georges Pompidou highway which has been pedestrianised for the event. Cultural highlights along the beach include a Nile River-themed exhibition from the Louvre museum, a pop-up library by Flammarion Bookshops and a special event themed around the novella Le Petit Prince.

Other activities in the area include a dance competition on the Hotel de Ville square plaza, tai chi, table football or boules and various children’s activities, from sandcastle workshops to cycling with P’tit Vélib’, a new bike rental scheme launched last year for children between the ages of two and eight. 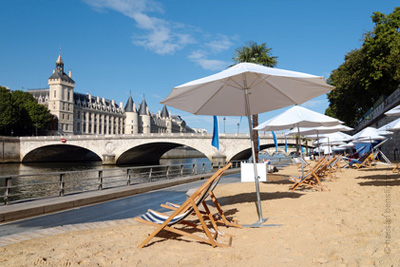 Visitors to the Bassin de la Villette, the capital’s largest artificial lake connecting the Canal de l’Ourcq to the Canal St Martin, can partake in a range of watersport activities including paddle boating, sailing and canoeing. Guests can also access facilities for sports on dry land including archery, badminton, tennis, golf and frisbee in addition to football and tai chi.

While beach lovers can indulge themselves under the sun in a makeshift seaside resort setting overlooking the Seine, swimming in the river is still off limits and has been since 1923, with those who dare to go for a swim facing a €15 fine.

Earlier this month, Paris mayor promises to make the Seine clean and safe for swimming by 2024, following the announcement of the city’s bid to host the Olympic Games the same year, hoping for the swimming leg of the Olympic triathlon event to be held in the river.

The same pledge was made by former French President Jacques Chirac in 1988 who said it would be ready for swimming by 1994, a year before the end of his term. 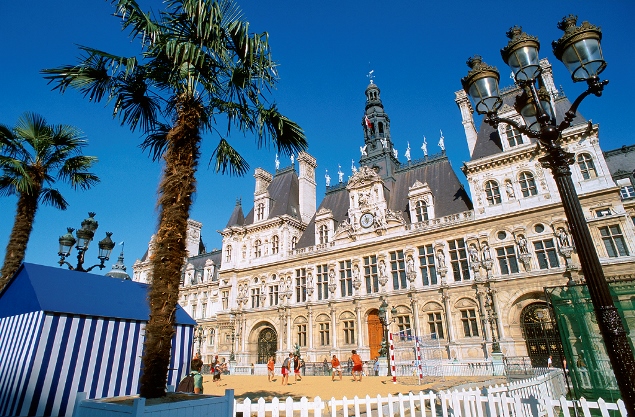 But it appears not much has been done to clean the river since. In 2012, a swimming event in the Seine was cancelled by authorities who deemed the water was too dirty and potentially hazardous to the health of the swimmers. In the same year, however, the 0.5 mile (750 metre) long swimming portion of the Paris Triathlon was held in the Seine.

“The possibility for everyone to swim in the Seine will form part of the precious legacy that this collective Olympic adventure must leave us,” said Ms Hidalgo.

Earlier this year, the mayor of Paris also revealed plans to ban cars from a large part of the Seine’s Right Bank by next summer as part of an effort to pedestrianise the heart of the city.

Back in 2013, former Paris mayor, who introduced the Paris-Plages event to the city in 2002, had a 2.5 km section of the Left Bank, the road between the Musée d’Orsay and Point de l’Alma bridge; close to motorists, aiming to help restore the Unesco World Heritage site and reduce pollution.

“It [the Left Bank] is one of the most beautiful places in the world,” the mayor told radio station France Info.

“The bank of the Seine between the Musée d’Orsay and the Pont d’Alma is an urban motorway, it is an aberration.

“We are returning this part of Paris to Parisians and lovers of Paris,” he added.